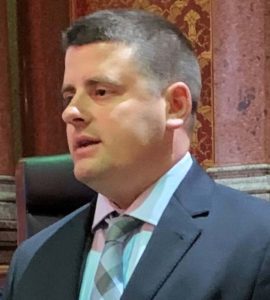 Iowa House Speaker Pat Grassley says it’s too soon to say what sort of a tax plan might emerge from the Republican-led legislature in 2021.

“We have 14 new members,” Grassley said this afternoon. “I’m not even sure if they know where the committee meetings meet, let alone where they would stand on that, so we’ll have those conversations with the governor.”

Last spring, due to the pandemic, Republican Governor Kim Reynolds tabled her “Invest in Iowa” plan to cut income taxes by 10 percent and raise the state sales tax by one percent to spend more on water quality and mental health services. Today, Grassley and the 58 other Republicans who’ll serve in the new, larger GOP majority in the Iowa House met as a group for the first time. Grassley said voters sent a clear message in this year’s election.

“House Republicans represent 97 of 99 counties. Democrats just represent pockets of counties in certain parts of the state, but I don’t think they speak for all of Iowans,” Grassley said. “Remember, we’ve been in the majority now for over 10 years which in Iowa or just in general I think is a pretty long run…and we’re going to continue down the path that we’ve been on: responsible budgets, keeping taxes low.”

Grassley’s peers have reelected him as the GOP’s top leader in the House. Grassley said he doesn’t see any reason lawmakers wouldn’t return to the state capitol to begin the 2021 legislative session on January 11, but he said it’s likely some of the pandemic precautions taken in June at the conclusion of the 2020 session may be used again.

“Our expectation is to return in the beginning of January and get to work,” Grassley said. “Iowans expect that.”

Matt Windschitl of Missouri Valley will remain as the second-ranking Republican in the House, serving as majority leader. Grassley is the grandson of U.S. Senator Chuck Grassley, who’s current term concludes at the end of 2022. Pat Grassley was asked today if he might run for the U.S. Senate in 2022 — and the younger Grassley joked it was the only answer he had practiced before he met with reporters at the statehouse.

“I am not going to answer questions about that between now and 2022,” he said. “I am focused on the legislative work that we have before us. I hope I don’t get that question again from you guys, but if you do give it to me, I am focused on being the speaker of the Iowa House. I’m not even concerning myself with that. We’re literally coming off of an unprecedented election, up to 59 (GOP) seats. That’s where my focus is going to be.”

Grassley said Iowa’s 2020 elections went smoothly, with record turnout and he told reporters that validates the laws Republicans in the Iowa legislature passed to ensure the identify of voters was verified. Grassley said it’s too soon to say the presidential race is over nationally until there’s a resolution of the Trump campaign’s legal challenges.