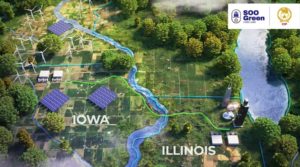 It would run 220 miles along railroad rights-of-way from Mason City to the Mississippi River, then on to Yorkville, Illinois, near Chicago. Soo Green spokesman Steve Frenkel, says it would be the first link in a major project that would send “clean” electricity to the East Coast.

The initial proposal would deliver two-thousand megawatts of power from the wind and solar farms in central Iowa to the East Coast, enough power to light 1.2 million homes. “The Midwest offers low-cost, highly efficient renewable energy development that can meet the needs of higher demand in population centers in the East where you’ve got a lot of ambitious clean energy goals,” Frenkel says. “We as a nation need a national clean energy grid and Soo Green could be the first link in what we’re calling a U.S. clean energy superhighway.”

Neil Jones, Soo Green’s vice president of real estate, says they’re working to pair up companies known as “shippers” that are interested in “transmission capacity rights,” generation companies or utilities that want to sell power on the line, and customers interested in buying that power.  Jones says, “If they have interest in either selling or buying renewable energy from us, and this is large-scale — these are not private individuals, these are large-scale buyers and sellers — they can express interest letting them know either what they can provide or what kind of demand they have.”

The buyers and sellers may be utilities, data centers, and others who want to buy Renewable Energy Credits. They’d pay for access rights to fund operations while ratepayers in Iowa would not be charged at all. Jones says Soo Green needs a permit from the Iowa Utilities Board to proceed and filed a petition in September.

“Because the Iowa Utilities Board only addresses those areas outside of the city boundaries, the municipal boundaries, we are also reaching out and talking with all 24 different Iowa municipalities that we will be going through to enter into franchise agreements with them,” Jones says.

Soo Green says its underground transmission cables are safe for humans, animals, the environment and railroad operations, while being less vulnerable to extreme weather events. The project is expected to be completed in 2024.