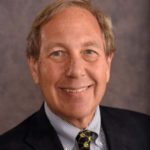 University of Iowa president Bruce Harreld, preparing to retire next year, predicts the competition among the state’s higher education community for scarce state support will escalate in coming years.

“Resources have been constrained for many a year,” Harreld said at the Board of Regents meeting last week, “and they’re apt to stay that way.”

The state’s community colleges, private colleges and universities as well as the three state-supported universities in Ames, Cedar Falls and Iowa City also will be competing for a smaller pool of potential students. That’s because the birth rate dropped during the so-called “Great Recession” of 2007 and 2008. The number of high school graduates is projected to decline by 15% by 2026.

“There is going to be a lot of hand-wringing here as some of these headwinds play themselves out,” Harreld said. “I’m worried that there could well be a struggle for a number of us.”

Harreld argued the University of Iowa should position itself as a “destination university” and compete for students internationally as well as in-state and around the U.S.

“The better we are, I think the better we’ll be able to weather the headwinds that are coming at us,” Harreld said.

Harreld is a former business executive who was hired to lead the University of Iowa five years ago. A search for his successor has begun and Harreld has said he’ll stay in the job until his replacement is named.