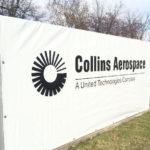 Collins Aerospace is laying off more than five dozen workers at plants in Bellevue and Decorah.

Collins Aerospace has about 10,000 employees at facilities in Cedar Rapids, Coralville, Decorah, Manchester and Bellevue. The Des Moines Register was first to report the company has notified state officials it will cut 29 positions from the job sites in Decorah and another 36 from Bellevue. The layoffs are effective January 2.

In late October, Raytheon — the company that owns Collins Aerospace — reported that due to the significant decline in air travel, the company’s profits fell 64% in the first three quarters of the year.