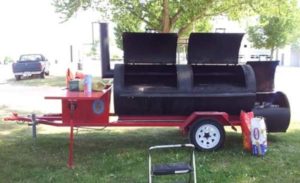 A grill stolen from the Manchester American Legion Post has been recovered.

Legion Commander Larry Tibbott says he received a phone call from the Manchester Police Chief on Tuesday telling him the grill had been found in Newton, thirty miles east of Des Moines.

“It’s hard to explain the feeling you get — it’s a prized possession that had been lost and then found — it’s just a happy feeling,” Tibbott says. The grill was missing last Thursday morning – and had last been seen behind the Legion in downtown Manchester on Saturday, November 28th.

The grill is worth around $12,000 and is used in the Legion’s steak fry fundraisers that raise money for a variety of projects. Some local Manchester businesses had banded together to come up with a $600 reward for whoever was responsible for returning the grill.

They’re be sifting through the details to find out who the reward will go to, but Tibbott says he really needs to thank the community, which has shown the Legion incredible support throughout this situation. He says the community has been amazing in getting the message out as it was shared over and over on social media. Tibbott says it’s a good feeling knowing that the community is supporting them.

The grill will need some minor repairs due to damage — and police are still investigating and trying to determine who took the grill and how it ended up in Newton.