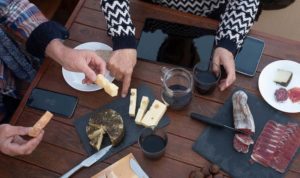 “We’ve been interested for a while in looking at the impact of diet on cognition and on the brain as we get older,” he says. “We wanted to look at the kinds of different foods that people eat and if there is a relationship with how flexible their thinking is over time.”

Willette’s research is featured in an article published in the November issue of the Journal of Alzheimer’s Disease. Willette and an ISU graduate student were granted access to information in what’s known as the “BioBank” in Great Britain. It contains in-depth genetic and health information from half a million people.

Their most significant finding was that cheese is the food that seemed to provide the most protection against cognitive decline and daily consumption of alcohol, especially red wine, appeared to improve cognitive function.

“These things which taste good actually, at least for your brain, might be good for you,” Willette says, “and that I think is a departure a lot of the diet literature that basically says if you live like a monk, then, you know, you should be good.”

It may be worthwhile to follow up with a clinical trial to test these conclusions, according to Willette, as one path in Alzheimer’s research is pursuing the theory exercise and diet can have an impact on cognitive performance as we age.

“But I think more important and more practical is that it doesn’t always have to deal with adding things we usually don’t like and taking away things that we do,” he says. “It’s more complicated than that and we’re hoping that modifying our diet in ways that are fun actually may be a good route to go.”

And Willette says in the midst of a pandemic, he was pleasantly surprised the results suggest responsibly eating cheese and drinking red wine daily may have these side benefits for our brains.