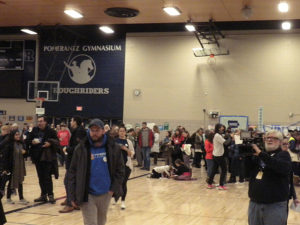 People waiting to get the caucus process underway in Des Moines.

A review of the breakdown in reporting results from February’s Iowa Caucuses suggests actions by the Democratic National Committee were contributing factors, but the audit found state party leaders were ultimately responsible for the delay.

The audit specifically faulted the Iowa Democratic Party for failing to have an adequate call-in system as a back up to a smart phone app for reporting results. Former Iowa Attorney General Bonnie Campball was one of three lawyers hired by the party to conduct the review and she spoke with reporters during an online news conference.

“I really don’t know the future of the Iowa Caucuses and I don’t know that this report is going to alter that in any significant way at all,” she said. “In fact, I doubt that it does.”

The report did recommend that the Iowa Democratic Party consider significant changes to its complicated Caucus system. The review was announced in February, completed in November and presented to the Iowa Democratic Party’s state central committee Saturday. Campbell said she and other attorneys combed through thousands of pages of documents and interviewed people directly involved.

“It does take time to be thoughtful about something we’re going to put in writing that affects an important organization like the Iowa Democratic Party,” Campbell said, “so I’d rather be accurate than fast.”

The audit revealed for the first time that the Democratic National Committee prevented Iowa party leaders from releasing partial results that had been reported on Caucus Night. The Democratic National Committee did not participate in the audit and a spokesman for the national party suggested these kind of reviews typically begin after the General Election is over. Attorney Nick Klinefeldt, a co-author of the report, said the state party opted to start earlier “right after the event, when memories are fresh and documents are still available.”

The report recommends that Iowa Democratic Party leaders debate the future of the Caucuses and consider simply counting votes for each candidate and declaring a winner that way Iowa Republicans do in their Caucuses. Iowa Democrats use complicated math formulas and sometimes more than one round of counting at each Caucus site to calculate how many delegates candidates would wind up with at the state convention.