You are here: Home / Human Interest / The Christmas Star should be visible from Iowa tonight 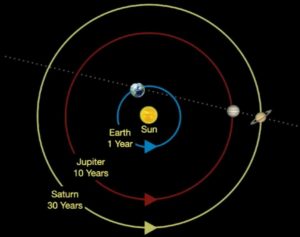 Jupiter will pass very close to Saturn, making it look like one star.

Forecasters predict the skies over Iowa will be mostly free of clouds tonight and we should have a clear view of what’s known as a planetary conjunction.

From Earth’s vantage point, Jupiter will pass very close to Saturn and may form what will appear to be a single shining star. Sundown is at 4:48 this afternoon and astronomer Sebastian Zamfir says the show will start not long afterward in the southwest.
“If we are patient, we’ll see that in about maybe 20 minutes, half an hour, it gets dark enough for the two planets to become visible,” Zamfir says. “They will stand out because they are very bright.”

The Earth is some 550 million miles from Jupiter, while Saturn is another 450 million miles beyond Jupiter, so Saturn will be much fainter as the planets approach conjunction. Some are referring to this as the reappearance of the “Christmas Star” and Zamfir says astronomers have tracked these events back millennia.

“Some of the good candidates, as natural phenomena that would be related to The Star of Bethlehem were this kind of conjunctions, planetary conjunctions,” she says. The last time this particular conjunction happened this brightly at night was over 800 years ago, though Jupiter and Saturn cross paths — from the Earthly point of view — about every 20 years.

Zamfir says conjunctions like this are thought to be the source of the Biblical story of the Star of Bethlehem connected with the birth of Jesus.  “An even more spectacular one in terms of brightness happened in 2 BC,” Zamfir says, “and that one was between Jupiter and Venus.”

With a good set of binoculars or a telescope, it’s possible you’ll be able to see some of Jupiter’s moons or even Saturn’s rings. Of course, neither Jupiter nor Saturn are generating light, as a star does. What we’re seeing is light from the sun reflecting off those planets.