You are here: Home / Fires/Accidents/Disasters / Radio Iowa’s top stories of 2020

A pandemic that began here in March, a massive storm that struck in August, and the politics that started in February with  Caucus chaos were the top stories in Iowa this past year.  Here’s a rundown of those stories:

Iowa’s first three cases of coronavirus were confirmed on March 8. Just three days later, the first infected patient was admitted to the University of Iowa Hospitals and Clinics. Then, on March 17, Governor Reynolds declared a Public Health Disaster Emergency, banning public gatherings of 10 or more people and closing an array of businesses.

“This is an unprecedented time for our state and our nation,” Reynolds said. “We are monitoring the situation in real-time and making evidence-based decisions to mitigate and slow the spread of the virus.”

Within hours, the state legislature voted to give the governor new spending authority to deal with the outbreak and adjourned. House Minority Leader Todd Prichard of Charles City said it was a unanimous decision.

“Today’s actions mark a significant event in the history of this House of Representatives,” Prichard said. “I’m convinced that bold action is needed to protect the state from the coronavirus.”

That same day, Jessica Dunker, head of the Iowa Restaurant Association, predicted the governor’s order would result in the permanent closure of hundreds of Iowa eateries and put 80,000 Iowans out of work.

“If we do not receive significant aid from the state and from the federal government, we are on the brink of  potential collapse in large swaths of our industry,” Dunker said.

Many Iowa restaurants and bars have closed, while some report profits are up for the year with carry-up and drive-thru business.

For many of us, our homes became our workplaces, and meetings via Zoom became common. All schools were forced to shift to distance learning last spring, taking a toll on students and educators. Davenport teacher Sarah Valle feared being forced to return to in-person teaching this fall:

“If it were feasible for me to not teach this year, I would do it,” Valle said. “Not because I don’t love it, but I’m just that scared.”

“This one is the one we’ve had most of the people printing,” Engelmann said. “This one’s pretty straightforward. It’s really just a visor with some foam in there to make it a little more comfortable with an elastic strap.”

Iowa hospitals got crowded, peaking in mid-November with more than 1500 Covid patients. The vaccine arrived in mid-December, with front-line health care workers getting the first doses. At MercyOne in Sioux City, nurse Lisa Torres said it was routine.

“Just like a usual vaccination, they went ahead and used the same process,” Torres said. “I felt when she used the alcohol swab on my arm, but I did not feel the needle or the injection at all.”

The state’s medical facilities will lose $433-million in revenue this year, according to a report from the Iowa Hospital Association. The report indicated hospitals lost more than $1.2 billion during the pandemic, but that figure was offset by federal relief.

The first Iowan to die from Covid complications was announced on March 24th in Dubuque County. Since then, more than 3,600 Iowans have died from the virus.

Many of us didn’t remember or may never have heard the term derecho before the storm packing big winds hit the state on August 10th. National Weather Service Meteorologist Jeff Zogg says the storm got going before the noon hour and made its way across the state. “It originated in west-central and northwest Iowa. Then moved across central Iowa into eastern Iowa and then into northern Illinois,” according to Zogg. Winds were reported as high as 100 miles-an-hour.

Governor Kim Reynolds says trees tore down power lines and power poles were bent over.
“At our peak last night, there were 550,000 households without power,” Reynolds says. “Linn County had 97% without power at one point, as well as Marshall County.” Jim Kidd is general manager of Consumers Energy based in Marshalltown says every link in the transmission system was heavily damaged.
“The nature of our business is we try to prepare and be prepared. The scope of this storm has overwhelmed everyone,” Kidd says. “You know, summer storms come through and are usually localized to a small area. Even ice storms are localized to a small area. This took a huge swath. We are hurting all over.”

Cedar Rapids City spokesperson, Maria Johnson, says they had 98 percent of the city without power. There were so many trees down that the city turned to a wintertime tool to help clear things.
“We actually had snowplows out on the streets to clear streets and make them as passable as possible,” Johnson says. Johnson says many of the grocery stores had generators and were able to stay open and provide food. The city was under a curfew for several days as a safety measure.

Cedar Rapids City Manager Jeff Pomeranz compared this one day storm to the major floods they’ve battled in recent years.
“I’m here as city manager to tell you that in my experience — and I was involved in the flood of ’08 as well as ’16 — this is a greater impact than we’ve ever seen in this community,” Pomeranz says. He says he is not minimizing at all the impact the floods had on the city.

It wasn’t only the cities that were hit — millions of acres of cropland were hit. Senator Chuck Grassley talked about that damage. “I’ve seen corn flat on the ground in 50 years of farming,” Grassley said, “but I have never seen it mile after mile, and very little of it recoverable, I think.”

Dennis Friest lives southeast of Radcliffe and was dealing with some damaged fields — and uncertainty about his crop insurance. “There’s a funny smell out there. Some of the corn is brown and dying. Some of the varieties are staying green,” he says. “We’re going to harvest some next week. We’ll find out what’s going on…If it’s too bad, we might just destroy it. We’ll have to see. Hopefully, if I get the snouts under it, I can run it through the combine and not get much dirt through it. We’re willing to give it a try…Even if we destroy one field, we may not be able to collect insurance because the others are pretty good, so there are a lot of decisions we have to make as farmers. It’s an unusual year.”

Much of the damage to homes and buildings were covered by insurance, and the governor requested a federal disaster declaration to help Iowans in 27 counties cover uninsured property damage. President Donald Trump visited Cedar Rapids and gave an assurance of federal aid to “We’ll get it taken care of,” Trump said. “…All of you, we’ll get it done very quickly.”

Marshalltown Mayor Joel Greer had this reaction when federal assistance was approved.
“Hallelujah, there is a FEMA God. It was a surprise because after the tornado we were disappointed, not to say we had our expectations up that high,” Greer says, “but this time I had been posting I wasn’t all that optimistic about it.” With the individual federal assistance available, Greer says it will keep the post-tornado — and now post derecho momentum — for the rebuilding and renovation of Marshalltown.

One month after the storm the city of Cedar Rapids was still picking up thousands of downed trees. City Engineer, Nate Kampman, all the individual piles picked up from the curb each day add up to one big pile.
“To put it in perspective– if we’re moving 35,000 cubic yards of debris a day if take a regular football field back of the endzone to back of the endzone, sideline to sideline — we are covering that football field between 15 to 20 feet deep every day,” Kampman says.
Trucks also went through the city to pick up piles of other debris left behind from the storms and were still at it into December.

As the year comes to an end the clean-up and fix-up of the derecho damages continues, some are still without homes and will likely take many more months of work. 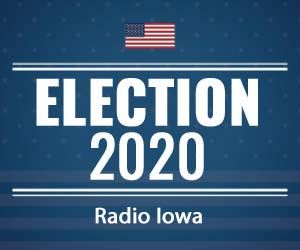 The Iowa Democratic Party’s delay in reporting the results of the February 3rd Iowa Caucuses is the top political story of 2020. It may wind up being the final strike against the first-in-the-nation event.

He resigned three days later. On Caucus Night, precinct chairs like Tom Courtney in Burlington couldn’t get the smartphone app to work to report results.

“Everybody complains about the app and we tried to call it in and we just couldn’t. I guess they were swamped up there,” Courtney said.

Pete Buttigieg was eventually declared the winner by a razor-thin margin. He gave a Caucus Night speech, claiming victory.

“So we don’t know all the results,” Buttigieg said and the crowd at his Caucus Night event laughed, “but we know by the time it’s all said and done, Iowa — you have shocked the nation.”

Bernie Sanders finished a fraction behind, in second place.

“What has happened with the Iowa Democratic Party is an outrage, that they were that unprepared,” Sanders said the day after the Caucuses.

Activists say the reporting glitch overshadowed precinct meetings which ran well and attracted new participants. Ten months later, the Iowa Democratic Party released a sort of autopsy of what went wrong. The report noted demands from the Democratic National Committee led to delays in the development of the smartphone app, the so-called autopsy specifically faulted the state party for failing to have an adequate back-up call-in system for reporting results. Former Iowa Attorney General Bonnie Campbell was hired by the party to conduct the review.

“I really don’t know the future of the Iowa Caucuses and I don’t know that this report is going to alter that in any significant way,” she said earlier this month.

In other political news this year, Governor Kim Reynolds issued an executive order in August, restoring voting rights to most felons who’ve completed their sentences.

“It boils to our fundamental belief in redemption and second chances,” Reynolds said during a ceremony in her statehouse office.

There was a recount in Iowa’s second congressional district race, then on November 30, state officials certified Republican Mariannette Miller-Meeks as the winner, just six votes ahead of Democrat Rita Hart.

“That race alone reinforces that every vote counts and can make a difference,” said Secretary of State Paul Pate, one of the statewide elected officials who certified the results.

Hart has asked the U.S. House to investigate, which could lead to another recount.

Iowa voters this year reelected Republican Joni Ernst to a second term in the U.S. Senate.

“The election is over and it’s time to start the healing,” a hoarse Ernst said on Election Night. “We need to turn down the rhetoric and start listening once again.”

“Of course, I was a little bit nervous, but I knew in my heart that we had done the work necessary to win this seat,” Hinson said on Election Night.

“You know, you campaign for 22 months to get to this point,” Feenstra said on Election Night.

Third district Congresswoman Cindy Axne of West Des Moines was one of the few bright spots for Democrats on Election Night, winning a second term in the U.S. House. Her victory also secured a new female majority in Iowa’s congressional delegation in 2021.

“I think women just know how to get things done,” said Axne, who after just one term in the House will be the dean of the Iowa delegation.