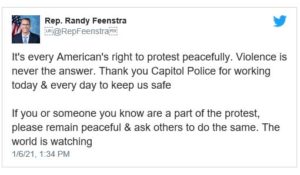 Both of Iowa’s U.S. Senators and all four members of the Iowa delegation in the U.S. House are safe and five of the six have issued public statements denouncing the violence that has erupted in the Capitol.

Senator Chuck Grassley is third in line to the presidency and his staff has confirmed Grassley is safe and in a secure location. Senator Joni Ernst issued a statement via tweet, calling what’s happening in the Capitol “anarchy and a betrayal of the American ideals we all hold dear.”

Republican Congresswoman Ashley Hinson of Marion was first to speak by tweet, saying “no matter the circumstance, this kind of violence and behavior is unacceptable.” Congresswoman Cindy Axne, a Democrat from West Des Moines, was next to tweet and it was a direct appeal asking President Trump to tell those attacking Congress to stop.

“What we’re seeing here in Washington I thought a country like the United States would never see. They’re staging a coup,” Axne said in a brief interview. “They have made it into the Capitol, onto the (House) floor, into Statuary Hall. The last thing I saw was someone coming out, bloodied, on a stretcher. We’re in complete lock down.”

Republican Congressman Randy Feenstra of Hull tweeted that “the world is watching” and violence is never the answer.

“What we’re seeing is completely unacceptable when you have anarchy like this,” Feenstra told Radio Iowa in a brief interview. ” …It’s just deplorable.”