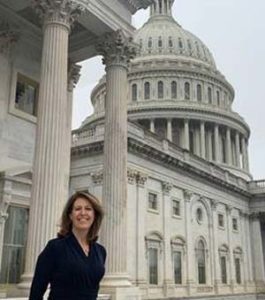 Axne, who is the only Democrat in Iowa’s congressional delegation, said in a written statement that the president’s actions and rhetoric clearly pose “a grave threat to our nation’s citizens and our democracy.”

Yesterday, Axne had called upon Vice President Pence and members of the cabinet to invoke the 25th amendment and remove Trump from office. Axne said since Pence is not pursuing that, the only Constitutional option left for congress is to approve articles of impeachment.

“I do not make this decision lightly, but President Trump has the blood of five Americans – including one Capitol Police officer – on his hands,” Axne said in her written statment. “…A President who incites an attack on the seat of our government is a threat that cannot be tolerated for even one more day.”

Republicans Congresswoman Ashley Hinson of Marion has issued a statement this morning, saying she will oppose impeachment because the country “does not need further division right now.” She cited Trump’s statement last night, saying he is supporting “the peaceful transition of power to President-elect Joe Biden.”

Yesterday, during an appearance on Iowa Public Radio, Republican Congresswoman Mariannette Miller-Meeks of Ottumwa made clear she opposes removing Trump from office. Miller-Meeks said with two weeks remaining on his term and the president having said there will be a peaceful transition to President-elect Biden, “it’s time to try to unify our nation…and help us to heal.”

“Any effort by the House to impeach President Trump will only deepen divisions, and I will strongly oppose any attempt to remove the president from office before the end of his term,” Feenstra said.