You are here: Home / Education / Final Cedar Rapids school damaged by the derecho preparing to open 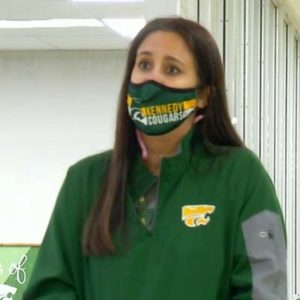 The final preparations are underway to allow Kennedy High School in Cedar Rapids to re-open for the first time in nearly 10 months following damage from the derecho and remote learning for the pandemic.

While all schools in the Cedar Rapids Community School District sustained derecho damage, Kennedy took on the worst of it and will be the final school in the district to welcome students back on campus. Associate Principal Jessica Johnson told KCRG TV getting back in January is almost a relief.

“When I first saw the damage, we thought it would at least be a year before we were able to get this building back together,” Johnson said. Johnson said the north part of the building, which includes the library, the auditorium on the same side of the school, and the gymnasium on the southwest side of the building took on the brunt of the damage. She says there was water gushing in and they had to take out all the cabinets to fry everything out.

Kennedy held its first basketball games in the renovated gym last week, where a new floor, bleachers, and roof were installed. About 80% of of the building’s roof had to be replaced, according to Johnson, a cost that made up much of the more than 11 million dollars in derecho repairs overall at Kennedy. More than 300 books in the library were soaked and ruined. Kennedy staff said smaller projects, like painting, will be ongoing throughout the spring semester, while workers will not be able to tackle remaining exterior work until the summer.

“The hard thing right now is, we’re finding more damage as we move in because we haven’t had teachers in their classrooms,” Johnson said. Teachers will be preparing their classrooms this week to welcome students back on January 19th. Not all teachers had a chance to adjust their classrooms to be COVID-safe before the derecho hit, so many of them are doing that now.