You are here: Home / Weather / Pocket your smartphone to protect it from the Iowa winter’s chill 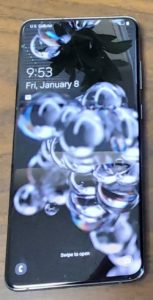 With the pandemic, many Iowans are spending more time outside to get exercise, even during the winter, and some may be noticing the cold can quickly sap the power from their cell phones.

Most phones use lithium-ion batteries which contain a liquid. Dee Taylor, the west Iowa sales director for U.S. Cellular, says that liquid can definitely be impacted by the cold air.

“Anything below 32 degrees is going to start slowing down your phone when you have complete exposure,” Taylor says. We typically think of the heat of an Iowa summer causing issues for smartphones, but extreme cold can do the same. When it’s freezing outside, Taylor says the molecules shrink and can cause trouble with displays, buttons and battery life.

“Having your phone in your pocket is definitely better than throwing it in a bag or a purse,” Taylor says, “but you should also protect your phone by keeping it in a case.”

Some cases protect shield the phone from impact, but the screen is often only covered by a thin layer of clear plastic. Does that really help?

“It can because it’s still creating a barrier for your device and the screen,” she says. It’s best to keep your device fully charged to avoid the battery being completely drained in outdoor temperatures.

We’ve all seen joggers on the sidewalks, even during the winter, with their phones strapped to their biceps so they’ll have music for the run. Taylor says those arm straps aren’t the best idea for a phone during an Iowa winter.

“When you’re out in the cold, it’s much better to keep that in a pocket versus just complete exposure, such as your arm,” Taylor says. “Certainly, it’s better than keeping it in a purse or a bag that’s completely open. You want to have some type of protection.”

If you’ve been outside, she suggests letting your device warm up before using it and don’t leave your phone outside in parked car. If a phone powers off due to the cold, she says to give it time to warm up to room temperature before you hit the power button.