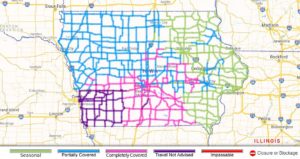 Hundreds of snowplows are fanned out across the state, doing their best to clear the drifts and keep the roads passable, but some of them are losing the fight in this blizzard.

Craig Bargfrede, winter operations administrator for the Iowa Department of Transportation, says the heavy snow and high winds are knocking visibility down to almost zero in some areas, making for what he calls a “challenging day.”

Bargfrede says, “Currently, we’ve got somewhere in the neighborhood of 625 plows that are active out on the system, plowing and treating and trying to get the system back to near-normal condition.”

State troopers are warning motorists not to venture out onto hundreds of miles of roads in the southwest corner of the state, though Bargrede says as yet, his plow drivers haven’t encountered any insurmountable problems.

“So far, I’m not aware of any issues that have caused us to pull plows off the roadways,” Bargfrede says. “As far as I know, plows are still out and about. You’re correct, down in the southwest portion of the state, we’re showing on 511, travel not advised at this point in time.”

The Blizzard Warning will continue to be in place for much of the state’s western half through 6 o’clock tonight and the snowplow drivers are working to stay ahead of the blowing and drifting snow, though it’s a difficult chore.

“They’ve already planned shifts accordingly,” he says. “I anticipate a lot of our crews continuing on throughout the day and into tonight and probably a fair number of them will be out again tomorrow once the winds do die down so that we can hit all of those trouble spots and make sure the system is back to near normal.”

The pandemic has pushed many Iowans to work from home and it’s hoped many of them can remain in their homes for the duration of this storm. “We’re suggesting to the public that if you do not need to travel today, especially in the central and southern part of the state, put those travel plans off until tomorrow,” Bargfrede says. “It will allow us to get out there, get the plows working and the snow cleared off.”

For those who feel they have to travel, before you head out, consult: 511ia.org.