You are here: Home / News / Senator Grassley says: ‘I hope we can retire #resist.’ 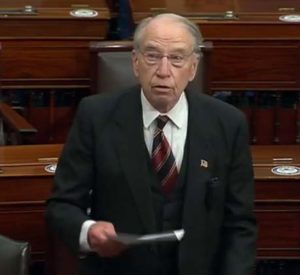 “Like four years ago, I know that many Americans are not happy with how it turned out,” Grassley said. “…I hope we can retire #resist.”

Grassley delivered brief remarks on the Senate floor late this afternoon. Grassley said as “a responsible senator,” he has to engage with the administration that’s in office.

“As I have with every president, I will seek to find common ground with President Biden wherever possible,” Grassley said, ” but I will strongly oppose policies that I think are not good for Iowa or all Americans.”

Grassley and Biden served together in the Senate for 28 years. Grassley has held public office since 1959, over the course of a dozen presidencies.

“In our country, nobody is obliged to like or support a president, but hopefully people will really respect the office of the presidency,” Grassley said, “regardless of who holds it.”

Grassley is no longer third in line to the presidency. For the past two years, Grassley has served as the senate president pro tem, but a Democrat transitioned into that role late today. The position is occupied by the longest-serving senator from the party that holds a majority in the Senate. Late this afternoon, three new senators were sworn into office, giving Democrats a working majority in the U.S. Senate.