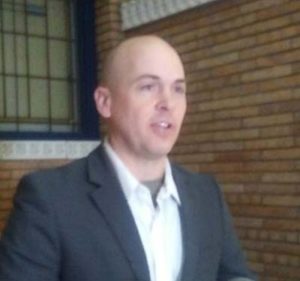 Taylor was elected to a four-year term in November and says he could be gone through the end of the year. “I anticipate through the fall — maybe ten, eleven, twelve months. We’d like to be home by Christmas, that would be great,” Taylor says. Taylor will not be able to attend meetings remotely while deployed. He attended Tuesday’s supervisor meeting and is taking temporary unpaid leave while deployed.

He says they are given 30 days where employers pay them if they are deployed because they don’t get paid right away from the guard. Taylor says after the 30 days he will not get paid by the county. The Iowa National Guard is not revealing exactly where his unit is going for security reasons.

Taylor is a chaplain and will serve in the capacity while deployed with the 734th regional support group of the Iowa Guard. “We really try to gauge the morale of our units that we are serving as well as provide religious services and care and counsel,” according to Taylor. “Our motto is we care and comfort the wounded, we nurture the living, and we honor the dead. We really try to speak into those lives hope and care for those who are in a very austere environment and in harm’s way. That’s something that we do on a daily basis — and it has been some of the most rewarding work of my life.”

Taylor had resigned from the Woodbury County Supervisors after a challenge to his residency when he moved. He then won re-election in his new district.