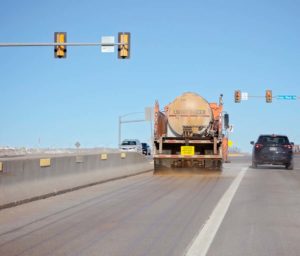 Des Moines truck applying the salt-beet mixture to the roadways.

Street crews in Iowa’s largest city are using an atypical product on the roads today in anticipation of more snow over the weekend.

“It’s a regular part of our snow-fighting arsenal and we’ve worked it into the toolkit years ago,” Gano says. “It does have a benefit to the motorists, a benefit to the budget, and it helps us deliver a safer roadway in a wider variety of winter conditions.”

Gano says the concentrated beet juice is being purchased in bulk from a supplier in Minnesota. While beet juice is typically a reddish-pink color, when this solution is sprayed onto the road, it’s more of a brownish-orange, and it may leave you with a hankering to order Chinese food.

“It does have a distinctive odor. It kind of smells like soy sauce, if you’re walking by when the truck happens to go by,” Gano says. “It’s non-corrosive so it won’t do harm to the passing automobiles. It’s not like salt where it will accelerate the corrosion of either the body or the frame or parts on the undercarriage.”

Gano says at certain temperatures, salt works well to melt snow and ice, but below 20 degrees, salt loses its punch and that’s where beet juice helps. Plus, he says beet juice won’t wreck our cars — or the planet.  “It’s beneficial for the environment because it is not salt, which can have an accumulating impact on the environment downstream,” Gano says. “We incorporate beet juice into our anti-icing program as a way to improve the safety of winter travel while also trying to reduce the environmental impact of that same thing.”

The City of Des Moines contains more than 2,200 miles of roads, most of which will soon smell faintly of soy sauce.