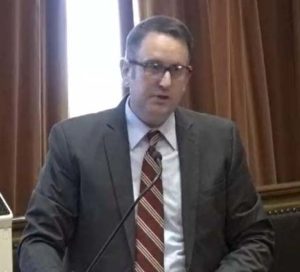 The top Democrat in the Iowa House is calling for a GOP lawmaker to be removed from his committee assignments.

The top House Republican calls it an attempt to stifle free speech.

House Democratic Leader Todd Prichard said Republican Representative Dean Fisher of Montour has failed to publicly apologize for comments on Facebook about the election that Prichard describes as “false and misleading.” Prichard first raised the issue during a speech on the opening day of the 2021 legislature.

“It is up to us, the newly sworn leaders, to protect our country from the fate of further division,” Prichard said.

Fisher wrote on Facebook that there had been “outright cheating” in Democratic areas of the country, but Fisher said Republicans would prevail because “our side has the guns.” Prichard said elected leaders cannot “turn a blind eye” to that kind of rhetoric, which Prichard said led to rioting at the U.S. Capitol.

“For too long, politicians have not only enabled, but served as a willing partner in the spread of misinformation about election fraud,” Prichard said January 11. “…Until you have committed yourself to truth and democratic ideals, you lose any moral high ground that you may try to claim.”

Republican House Speaker Pat Grassley, in a written statement issued this afternoon, said Prichard is “playing the exact partisan politics he hypocritically denounced.” Grassley said Prichard “seems to believe that the right to free speech should only belong to those he agrees with.”