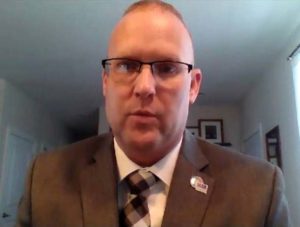 Jesse Howard of the New London School Board.

The governor’s plan to provide $5,000 state scholarships to cover private school or homeschooling expenses is being debated in the Iowa Senate this week.

The plan would also stop administrators in five school districts with voluntary diversity plans from denying open enrollment transfers out of those districts.

“We’re empowering parents with the ability to choose what’s best for their children,” Logan Shine, one of Governor Kim Reynolds’ policy advisors, said this morning.

Trish Wilger, executive director of Iowa Alliance for Choice in Education, was one of two people to speak in favor of the concept at a subcommittee hearing this morning.

“This is about giving parents the ability to choose what they feel works best for their child,” she said, “…putting parents in the driver’s seat, giving parent options.”

The new state scholarships would be available for students living in the 34 Iowa public school districts with the lowest student test scores and high school graduation rates. Chuck Hurley of The Family Leader said the proposal is targeted at schools that aren’t doing well.

“What we really need to do with education policy, in our opinion, is be first and foremost concerned with the students’ outcomes,” Hurley said during the subcommittee hearing. “We should fund children and not particular systems and any public school that’s concerned about this bill, that doing a good job with the children should not have anything to fear.”

“This bill will potentially finance a cycle that could lead to segregation of Iowa schools,” she said, “…allowing wealthier families to flee public schools for less diverse charter or private schools and reducing funds for poor and minority students.”

Anderson Sainci, a member of the Dubuque Community School Board, said shifting state dollars to private schools will have a negative impact on poor, middle class and racial minorities.

“I hope our legislators will truly live by our goals and missions to do what’s best for all Iowans, not some,” he said.

Jesse Howard, a member of the New London School Board, is a southeast Iowa district director for the Iowa Association of School Boards and he spoke during an online news conference this morning. He called the scholarships “vouchers.”

“Vouchers represent a rural to urban shift of resources,” he said. “The survival of rural schools depends on adequate state funding…As one parent told me this weekend, this bill is going to create the wild west of public education and be the death of what we look at for quality public education.”

A Senate committee will start debating this plan later this afternoon. The expectation is the full Senate will vote on it as soon as Thursday.