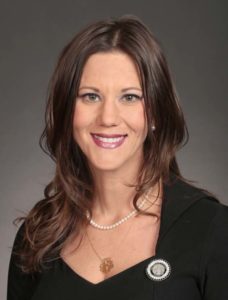 A group of Republican legislators say conservative students at Iowa’s public universities are complaining to them that they’re being harassed on campus because of their political views.

Representative Holly Brink, a Republican from Oskaloosa, convened a Government Oversight Committee hearing this week with administrators from the three schools.

“Iowa State, UNI, and the University of Iowa — you are here for Iowans. Iowa is not here for you,” Brink said. “And we will continue to protect and make sure that things are going right for students and the next generation.”

Administrators at the hearing apologized for a series of recent campus conflicts over student free speech rights. David Johnsen, the dean of the University of Iowa College of Dentistry, apologized for an email exchange he had with a student. It was a “reply all” conversation distributed to everyone in the dental school.

“We do not want any of our students to have an experience that leaves them feeling unsupported or fearful…To be honest to the committee, we have heard from other students, faculty and staff in our college that we’ve failed them as well,” he said. “…Since October, we’ve been reviewing what happened, how the process worked and didn’t work and we’re working to implement steps that will prevent this from happening again.”

Other lawmakers accused the public universities of failing to teach conservative economic theory and being hostile to students who oppose abortion. Representative Bobby Kaufmann, a Republican from Wilton, said the three public universities need to develop a plan to respond to thousands of students over the decades who’ve felt there’s one set of rules for conservatives and one for liberals.

“Your goal, as universities, is education, not indoctrination,” Kaufmann said, “and so I would just ask that you report back to us.”

In 2019, Republican lawmakers enacted a campus free speech law. It directing Iowa’s public universities and community colleges to ensure “the fullest degree of intellectual freedom and free expression on campuses.”

Representative Chuck Isenhart, a Democrat from Dubuque, said there are all sorts of disputes in state government and the Oversight Committee has to be selective in its investigations or it will turn into a full-time “grievance committee.”