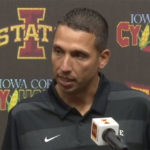 Campbell led the Cyclones to the most-successful season in school history while navigating a world-wide pandemic last season. ISU advanced to and won its first-ever New Year’s Six Bowl game with a 34-17 victory over Oregon in the PlayStation Fiesta Bowl.

The Iowa State Athletics Department also agreed to provide Campbell a total of $3 million for staff salary enhancements over the next three years. The department will soon open its $90 million Sports Performance Center, which will house the Cyclone football team and all of the program’s support services. That building opens its doors in a few weeks.

“Coach Campbell has always put investments in his student-athletes and football staff before his own personal gains,” Director of Athletics Jamie Pollard said. “That is the essence of servant leadership and is what makes Coach Campbell so successful.”

Campbell raised the program to unprecedented heights after his Cyclones registered a 9-3 record and finished first in the Big 12 regular-season standings with a school-record eight league wins (8-1). ISU spent much of the 2020 campaign in the Top 10 rankings for the College Football Playoff and finished ninth in the final AP poll.

“I am extremely thankful to our President, Dr. (Wendy) Wintersteen and our Athletic Director, Jamie Pollard, for supporting our staff and program,” Campbell said. “The University has made a terrific commitment to Cyclone football and I’m thrilled to continue to move this program forward.”

Terms of Campbell’s new contract will be announced at a later date.