You are here: Home / News / Missouri River levee near Hamburg to be raised 8 feet 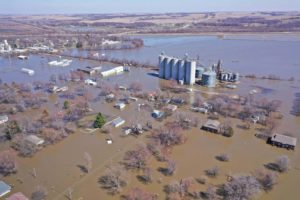 The U.S. Army Corps of Engineers and the city of Hamburg have signed an agreement to raise a Missouri River levee near Hamburg by eight feet.

Floodwaters surged over this levee into Hamburg during the 2019 flooding and the levee itself was damaged.

After 2011 floodwaters receded, the Corps ordered Hamburg to remove dirt that had been added on top of this levee, but Hamburg Mayor Cathy Crain says that extra dirt wouldn’t have been enough protection from the massive 2019 flood.

Hamburg will spend $7.8 million to raise the levee by eight feet. Corps officials say they’ll start accepting bids in a few weeks and construction on the project should begin this spring. A new federal law lets river levees be raised as well as repaired after flood damage. Officials say this levee near Hamburg is the first one in the country to get the go-ahead for a higher elevation.