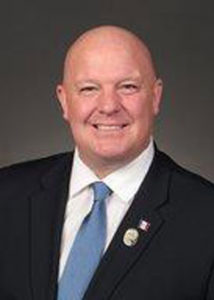 A law professor who’s a leader in the conservative American Legislative Exchange Council is urging Republicans in the Iowa Senate to table a bill targeting big tech companies.

The legislation would withdraw state and local tax incentives from Amazon, Apple, Facebook and Google if a court rules the companies illegally removed online content from conservatives.

“Look, I agree. I’m worried about the silencing of conservative voices as well,” Szabo said during an Iowa Senate subcommittee hearing. “I mean, heck, I’m a conservative, but unfortunately this is not the right approach.”

Szabo said these are private companies enforcing contracts with users who are not abiding by community standards.

“I understand that there’s a feeling that there are a lot efforts to stifle conservative speech, but forcing these platforms to host content that they don’t think is best for their users and their advertisers is not the right approach,” he said. “It violates every notion we have when we support the rights of private businesses to decide what’s best for them.”

Tyler Diers of TechNet, a bipartisan group representing technology company executives, said if the bill becomes law, business leaders will have to weigh whether it’s worth expanding in Iowa.

“We believe policymakers should be encouraging incentive programs and tax policies that attract and grow jobs in the state of Iowa,” he said. “It would be bad public policy for the legislature to weaponize economic development programs in order to forward a political agenda at expense of the state’s economic interest.”

Senator Jason Schultz, a Republican from Schleswig, said he can agree with some of the arguments against the bill — up to a point.

“These platforms have become weaponized by progressive ideology,” Schultz said. “…They will leave anything inappropriate up on the progressive side…but seem to jump immediately, like a guard dog, against anything that moves toward the conservative side.”

Senate President Jake Chapman, a Republican from Adel, is the bill’s lead sponsor and he made clear at the end of the hearing that it’s not being tabled.

Education groups warn the bill endangers contracts Iowa schools have with the big tech companies. A lobbyist for the three state universities said utility plants, the University of Iowa hospital, the campus computer, email and phone systems and the scoreboard at Kinnick Stadium could be shut down if the bill, as written, becomes law.