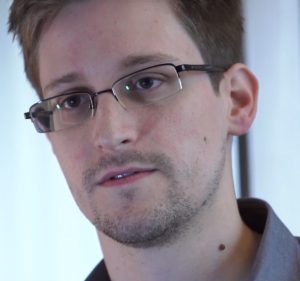 One of the most controversial figures in the past decade involving international espionage and the leaking of government secrets will be speak live from Russia in an Iowa State University lecture this week.

Edward Snowden, a former CIA officer and National Security Agency consultant, will address the topic, “Digital Surveillance: How Gen Z Gave Up Its Privacy to Corporations and the Government.”

Even blenders now have smart technology and Knief says such advances have truly impacted the way our personal information is collected and used by companies and by the government.

“This generation that’s in college right now, Gen Z, has really grown up with digital devices in their hands,” Knief says. “A lot of the issues about privacy and being tracked and giving your information out, these are things they have grown up with and are just every day.”

Snowden fled to Hong Kong in 2013 after revealing the U.S. government was pursuing an unprecedented system of mass surveillance. He shared highly-classified documents with The Guardian and The Washington Post, shining an international spotlight on issues of individual privacy and national security.

The whistleblower’s talk is available to anyone, free, via the ISU Lectures Program YouTube channel. Iowans, and anyone else, will be able to contribute to the conversation.

“On the YouTube channel, there will be a way for people to submit questions,” Knief says. “We’re going to have a couple of students facilitating those, so they will be seeing the questions in real time and then they will be able to convey those to Mr. Snowden.”

The lecture from Moscow will start at 7 PM/Central on Thursday.