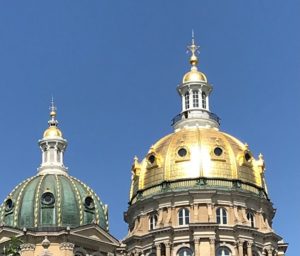 Iowa House subcommittees are advancing two of the governor’s education priorities. One bill would make it easier for groups to create charter schools. The other creates state-funded private school scholarships for students in struggling public schools.

“We’re happy to see the Iowa legislature entertaining so many ways to offer parents option this year. This bill gives choice to a handful of parents at a handful of schools,” Trish Wilger of the Iowa Alliance for Choice in Education said at a House subcommittee hearing today.

The “Students First” Scholarships would be for students transferring out of 34 public school building where test scores rank in the bottom five percent of Iowa schools. Shanda Carstens of Panora said state scholarships for private schools will be an incentive for families to leave rural towns like hers and move closer to cities with private schools.

“At the center of our community is our school: Friday Night lights, cheering on the basketball teams, watching the amazing dance team…I’m worried that this bill could put all of this in jeopardy,” Carstens said. “As we’ve seen in other states like Arizona, the voucher expense went from $1.5 million to over $100 million in just eight years.”

“People who are talking in opposition to this bill it so often doesn’t even reflect to the kids, (saying): ‘I’m opposed because public taxpayer dollars shouldn’t got to private schools.’ Well, who cares?” Wills asked. “If we don’t do something different, we’re going to keep getting what we got.”

Both bills now go to the House Education Committee, which is set to meet tomorrow. The Iowa Senate has already passed a single bill that includes these proposals and others that were part of the school choice agenda Governor Kim Reynolds unveiled in January.