You are here: Home / Crime / Courts / Trial of reporter arrested at protest goes to jury 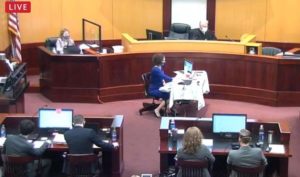 Attorneys gave their closing arguments today in the trial of a Des Moines Register reporter arrested in May at a protest at a Des Moines Mall.

Prosecutor Bradley Kincade told jurors they need to consider three things to find Andrea Sahouri and her then boyfriend Spenser Robnett guilty of failure to disperse and interference with official acts.

Sahouri testified she told the officer she was a reporter, but was still arrested. Kincade says that is not a factor in the case. He says says the word reporter, or phrase “doing her job” are not in the jury instructions.

“If reporting or doing your job were a defense, — it would have been included in the jury instructions,” he says. Sahouri and Robnett were pepper-sprayed and arrested on May 31st.

Defense attorney Nicholas Klinefeldt disputed the idea they didn’t follow the orders. “You cannot refuse to obey what you did not hear,” Klinefeldt says.

One of the issues is the arresting officer Luke Wilson did not start his body camera — and a system that allows the video to be recovered was not used later to preserve the video of the arrest. Klinefeldt says this raises questions about the officer’s actions.

“Keep in mind he had just arrested a Des Moines Register reporter. This is not an every day activity,” Klinefeldt says. “I will submit to you not only he could have — but he should have gone back and preserved that video.”

Prosecutor Kincade said he would like to have the video as well, but said it is not available and there are enough facts to convict the two.

The case went to the jury just before noon, after three days of testimony.