You are here: Home / Human Interest / Vaccinations at Manchester pharmacy give a ‘dose of hope’ 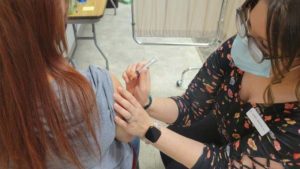 A vaccination at Brehme Drug.

The one-shot Johnson & Johnson COVID-19 vaccine is in short supply as Iowa drug stores and health departments that get a shipment quickly use it up.

Pharmacist Ashley Brehme, owner of Brehme Drug in Manchester, offered a clinic last weekend at the town’s fire station, administering about a hundred doses of the coveted vaccine.

Brehme took a call from an elderly couple to schedule an appointment. “The woman actually cried and thanked me for getting her in because they’ve been waiting for so long and we were finally able to get them through the waiting list,” Brehme says. “She just kept thanking me and crying. There’s so much emotion tied around it. It’s awesome to be a part of and really feel like with each shot we’re giving, we’re giving a dose of hope.”

Roger Hicks, of Manchester, got the Johnson & Johnson vaccine during the weekend clinic. Hicks says he chose to get the vaccine for a couple reasons.
“Just that I know that I should and there’s a few things down the road that it may be required so that I can do certain things,” Hicks says. “Plus, I had looked at all three of them and when I was able to get the Johnson & Johnson, one shot, why not?”

“We need to stop this thing,” Ryan says. “Even as vaccinated, I can still spread it. Now granted, hopefully, I’ve sealed it off from getting sick again but we need to get gaps built in our population so we’re not spreading it to each other and just continually moving it around.”

The state was expected to get about 70,000 total doses of vaccine this week, which is down from more than 100,000 doses last week, as Johnson & Johnson works to stabilize its manufacturing process and restock inventory.