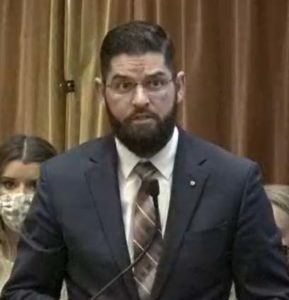 Republicans in the Iowa House have passed a bill that would let Iowans buy guns and carry concealed weapons without getting a state permit to do so.

“Those are my people. Those are House Republicans’ people…It’s those same people who saw fit to give us a 59-seat majority. It’s those same people whose basic human rights we are trying to respect and uphold with the advancement of this legislation,” Windschitl said shortly after 10 p.m. “I’ve been fighting for this bill ever since I got down here and, by God, we’re going to get it passed tonight.”

One Democrat voted for the bill. The other House Democrats opposed it, suggesting it would create a clear loophole to allow private gun sales in Iowa without a background check. Republican Representative Steven Holt of Denison said the bill establishes a felony for those who know or should have known a prospective gun buyer was not allowed to own a gun.

“Which means, to me, that you’d better darned well know who you’re selling to,” Holt said, “and I think that is a powerful deterrent.”

Holt also said there would be federal background checks if someone who doesn’t have a state permit tries to buy a gun at a licensed dealer. Representative Steven Hansen, a Democrat from Sioux City, expressed his doubts.

“If this was tightening up things and there were going to more background checks, the NRA would be all over this place and saying: ‘Don’t vote for it,'” Hansen said. “This bill doesn’t tighten anything up.”

Representative Mary Wolfe, a Democrat from Clinton, said getting rid of the state permit to carry a concealed weapon also does away with the required training session that goes along with the permitting process.

“It also ensures that everybody carrying a firearm in Iowa has at least a rudimentary knowledge of our laws surrounding self-defense and basic gun safety,” Wolfe said, “and that is a good thing.”

The bill would make permits optional, however bill backers say some Iowans would still get a concealed weapon permit to show when traveling in states where permits are required. After four-and-a-half hours of debate, the bill passed shortly after 11 o’clock. Senators have been working on similar legislation.