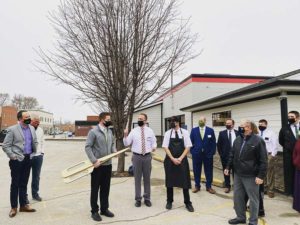 Colfax cut the ribbon to open on a new grocery Wednesday , replacing a longtime community owner with a longtime state grocery chain.

Fareway remodeled the Shugar grocery into a pilot store that is much smaller than their average store. Colfax City Administrator, Wade Wagoner, says it is a great solution for the town.

“Our longtime grocer Jim Shugar — who served our community wonderfully for I think 29 years — wanted to retire. And so we were really concerned about having our grocery store in perpetuity and what would we do without one?,” Wagoner says. ” And the good news for Colfax is Fareway has never closed a store in a community where they’ve opened one.”

He credits Shugar and his wife Kim for the idea to sell the store to Fareway when they could have just sold it and moved on.  At eight-thousand square feet it is the smallest Fareway store — but could be the model for other small towns facing the same dilemma. “If things go well here, you could start to see more stores, more Fareway’s of this size in other communities,” according to Wagoner.

The 2,100 or so residents of Colfax would have to drive 10 more miles to shop without a store in town. Wagoner says the store may not have everything the chain’s larger stores have — but it has enough for residents to shop locally.

“I’ve had several individuals who saw the store that said ‘we will be able to do all our grocery shopping right here”, “Wagoner says. Waggoner says it helps the economic development for the whole town to have the store.

“We feel very, very lucky to be the town that they chose to start this model in. Couldn’t be more flattered that Fareway chose us,” Wagoner says. Fareway says it will have 30 employees at the Colfax store.