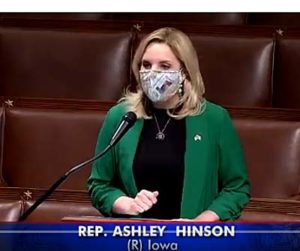 The three Republicans who serve in the U.S. House have voted against bills that would create a path to citizenship for so-called Dreamers who were illegally brought into the U.S. as children and for farm workers living in the U.S. without authorization.

Congresswoman Ashley Hinson, a Republican from Cedar Rapids, says the bill won’t fix the immigration issue. “First of all, we need to point at what’s happening at the border right now. There’s a national security, a public health and a humanitarian crisis happening right now at the southern border,” Hinson says. “That’s a direct result to me of President Biden’s executive orders that incentivized and increased illegal immigration.”

She says she would support a bipartisan approach to fixing the immigration issues. “I am a hundred percent supportive of taking a look at all of our visa programs, the process of immigration, for legal immigration. But is concerning to me when we look at this and say — look there’s a hundred thousand migrants who crossed the border in February alone. That’s up from 78,000 in January and from the looks of that, the trend is continuing here in the month of march,” Hinson says.

Hinson says is too broad. “There are so many immigrants in this country that have gone about it in the right way. And to in essence to create a cut in the line for people who have broken the law to come here — I think is too far,” according to Hinson. “We need to focus on a solution that actually looks at the long-term ramifications of these policies.”

Congressman Randy Feenstra, a Republican from Hull, says the border must be secured before congress explores any substantial immigration reform. Republican Congresswoman Mariannette Miller-Meeks of Ottumwa also voted against both bills.

Congresswoman Cindy Axne of Des Moines, the only Democrat in Iowa’s D.C. delegation, supported both bills. Axne says adults who were brought into the country as children know America as their home and deserve the opportunity to get out of legal limbo and fulfill the American dream.

Axne says the other bill about farm workers includes provisions she introduced last week that are designed to revise and expand the U.S.D.A.’s affordable rural housing programs.