You are here: Home / Human Interest / Paintings by Clinton woman gain a following in Europe 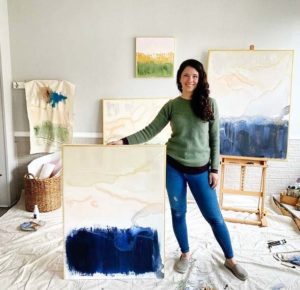 A Clinton artist will have some of her abstract paintings displayed in galleries and art shows in several European countries in a few weeks.

Gabi Torres says her postings on Instagram led to an increasing number of orders for her artwork. That exposure then led to the requests for pieces to display at various locations.

“That’s amazing, I never in my wildest dreams thought that would be. I just make art because I love it,” Torres says. She said images published in a British magazine also were a factor in those requests. Torres says she has developed an abstract style using acrylic paints a few years ago when she decided to invest more time in painting.

“I’ve been fortunate enough that they have been contacting me thus far. I feel really blessed by that, that’s been a big surprise, I never would have thought that. I am pretty excited,” Torres says. “I have to figure out how I am going to shift all my stuff to Europe.”

Torres has a studio space to work and hopes to use that space to help other artists. She also wants to expand the arts in her hometown. She says her goal is to create a program where visiting artists come to Clinton for a period of time and teach classes while creating a piece of art inspired by their stay in Clinton that will remain after they leave. Torres says that’s her five to ten-year goal.