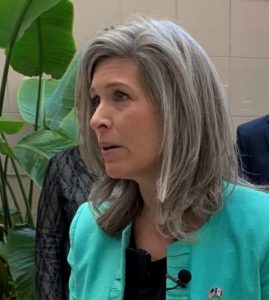 “We don’t want to see a lot of extraneous things put into the package and that’s where I think we’re going to run into a lot of heartburn,” Ernst said during a news conference in Des Moines.

Ernst, in an opinion column released earlier today, said the plan contains “every progressive wish list item under the sun,” like support for electric vehicles and labor unions. Other elements in the plan can be debated separately, according to Ernst.

“Things like child care and child care facilities — that’s wonderful. Those are things I work on, but that doesn’t necessarily go into this type of package,” Ernst said.

Ernst suggested a starting point for Biden Administration negotiations with congress could have been the bill that unanimously passed the Senate Environment and Public Works Committee last year.

“I am a member of that committee, worked really hard on that plan,” Ernst said. “…It would have been a really great place to kick off from, but instead the Biden Administration chose to go an entirely different route…so: ‘Please, Mr. President. Let’s go back. Take a look at the bipartisan work that was done in the last congress and let’s go from there.'”