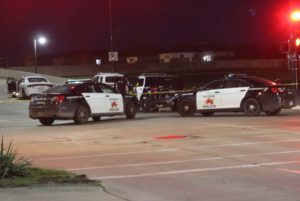 Waterloo police say a man carrying a gun was shot by an officer early today.

The Iowa Division of Criminal Investigation is investigating a shooting by a police officer that left a man injured in downtown Waterloo early today.

The incident happened around 12:45 a.m. after someone reported seeing a man carrying a long gun walking along a city street. A short time later, two Black Hawk County sheriff’s deputies spotted the man walking on a bridge that crosses the Cedar River.

Waterloo police say the deputies made contact with the armed man, who then pointed the weapon at hip level toward one of the deputies and chased after the deputy. According to information released by Waterloo police, a local officer saw what was occurring and fired at the man, striking him twice.

The man was taken to a local hospital for treatment, and later transferred to University of Iowa Hospitals and Clinics in Iowa City.

Waterloo police say neither the officer and or deputies were injured.