You are here: Home / News / Governor says there’ll be an independent investigation of Anamosa prison murders 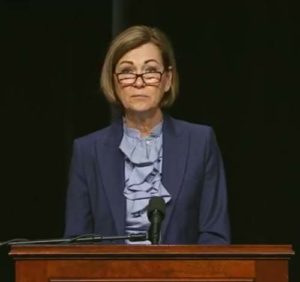 A new security director will be installed in the Iowa Department of Corrections in response to the March 23 attack by two inmates at the Anamosa State Penitentiary that killed two staff members. In addition to the internal investigation underway, Governor Kim Reynolds said an external investigation is planned.

“We’ll address any issues the investigations may reveal and we’ll do what’s necessary to protect our people. Nothing is more important than that,” Reynolds said during a news conference on Wednesday. “Changes may require additional investment, something that I am fully committed to doing, and this includes making sure that the department and its facilities are adequately staffed.”

Reynolds told reporters 93% of full-time positions in the prison system are currently filled. Hiring is underway to fill another 5% of prison jobs, but the remaining 2% of positions are “unfunded,” meaning there was no money in the current year’s budget for those position.

House Republicans are preparing a budget plan that would provide nearly $20.5 million more to the Department of Corrections for the budgeting year that begins July 1. Representative Ross Wilburn, a Democrat from Ames, said $20 million seems like a lot, but it doesn’t adequately address the security situation exposed by the attacks at Anamosa.

“This entire budget is one that’s been woefully underfunded,” Wilburn said during a House Appropriations Committee meeting.

“We have gotten this budget to the point where maybe it’s not 100% optimal,” Worthan said, “but it’s getting dang close.”

Worthan said there is no way to eliminate 100% of the risk of working in a prison.

“Unfortunately, people are trying to make political hay out of that tragedy. Anamosa is approved for 311 positions; 288 are filled as of the last pay period and 15 are in the process of hiring,” Worthan said. “Anamosa, by any stretch of the imagination, was not understaffed.”

“To say that we are playing politics is unfortunate and I would just say it seems to be a two-way street,” Hall said, “so we should all be careful of what we are saying when we point the finger if we have not looked at ourselves directly in the mirror first.”

In January, Governor Reynolds recommended a $5 million increase in the state prison system budget, for salaries and staffing. Last month, Senate Republicans said they had settled on a $4 million dollar increase.