You are here: Home / News / One arrested in protest at Iowa Capitol 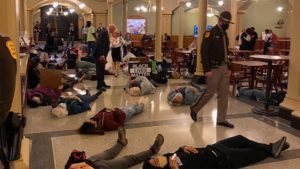 Protestors in the State Capitol. (Photo by Katarina Sostaric)

Black Lives Matter activists protested at the Iowa Capitol Thursday, urging lawmakers to reject a bill that would give Iowa law enforcement “qualified immunity” from most lawsuits over their on-duty actions.

“We’re literally in the middle of the Derek Chauvin trial, but we’re trying to pass bills to increase qualified immunity? What kind of sense does that make?” rally organizer Harold Walehwa asked rhetorically. “Why would y’all be trying to increase the protection police officers have instead of trying to go for accountability?”

House Speaker Pat Grassley told reporters earlier in the day that the legislature is on a tight schedule and the Minnesota trial of the officer charged with killing George Floyd isn’t a factor in the timing of bills to be debated in the Iowa House.

Angelina Ramirez, another protest organizer, spoke out against bills that boost penalties for rioters who cause property damage and forbid diversity training in schools and other government institutions from discussing gender or racial stereotypes.

“They won’t care about their Black and brown constituents unless…they’re pressured to,” she said. “We must be that catalyst.”

An Iowa State Trooper arrested an 18-year-old at the protest inside the capitol. Witnesses say she asked for the names and badge numbers of two officers. The Des Moines Register reports the trooper who made the arrest wrote in the criminal complaint that the high school student pushed his arm to get his attention.