You are here: Home / News / Legislators offer tributes to trooper killed in line of duty 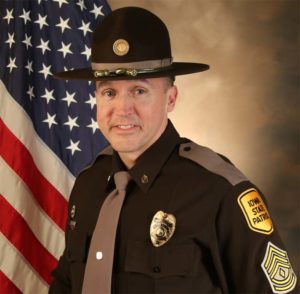 Three legislators have given emotional speeches in honor of the Iowa State Patrolman who was shot to death Friday during an armed stand-off in Grundy Center.

“The last time I spoke with Jim he was sitting down to give blood and was dressed as the trooper he was. I remember thinking at that moment: ‘What more is this guy willing to give?'” Johnson said, his voice cracking as he continued. “That is Jim Smith.”

Johnson’s and Smith’s daughters played volleyball together in Independence and will graduate in a few weeks.

“Jim Smith will be remembered by me as a friend, loving husband and dad who just adored his children,” Johnson said.

Johnson had to pause briefly to compose himself as he read aloud from the Facebook post he wrote this weekend after learning Smith had been shot to death.

“I cannot guess what he’d like me to say,” Johnson said, “but I’ll do my best and tell you how much he loved his Savoir and family and how much he enjoyed the wonderful experience of serving Iowans as an Iowa State Trooper.”

Johnson described Smith as a man with a good heart and a quick mind.

“My family is blessed to know Jim and his wife and children,” Johnson said. “His annual Christmas letters were exceptionally funny and brought their family outings and Jim’s humor front and center.”

Representative Chad Ingels of Randalia represents Smith’s hometown of Independence. Ingels told his House colleagues he did not know Sergeant Smith personally, so he began by reading Senator Johnson’s Facebook post in tribute before reading his own writing aloud.

“Sergeant Smith sounds like friends and acquaintances that we all have who serve in our communities. We can never sufficiently express our gratitude to those men and women that volunteer every day to run toward bad situations while the rest of us run away. I cannot imagine the guts and faith it takes to leave your home, ready and willing to help and protect others at what could be the expense of your own health or life. I will always be humbled by them,” Ingels said, choking up as he finished his speech.

Senator Annette Sweeney of Alden also gave brief remarks about what she described as a horrible tragedy in Grundy Center.