You are here: Home / News / Pandemic makes bikes and bike parts tougher to get 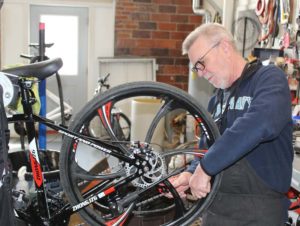 The pandemic found many people dusting off their bicycles that had been sitting in the garage as they looked to get out of the house.

Bike Central owner Kevin Richards in Le Mars says the interest is bikes followed along with a bigger pattern. “There was a huge uptick in sales all across the recreation industry, and particularly in bicycles. We are seeing that maintained and I anticipate that as the weather gets nicer we will continue to see an increase in the number of people — at least in inquires or looking to purchase. Or even just doing some repairs on their existing bicycle,” Richards says.

Richards says they took action as they started to see the interest in bicycles going up.
“This last fall we were pretty well made aware that bicycles were going to be in short supply. We made the decision to really bring in a lot of service parts that we normally don’t keep on hand, because if we need a service part that we don’t have,
we can usually get it within a day,” according to Richards. “Knowing that there would be some supply problems, we started stocking in a supply of repair parts.”

The Bike Central shop owner says the majority of bicycles come from southeast Asia and the global spread of the COVID virus forced plants and shipping to shut down, leading to the lack of supply. Richards says the parts companies are hesitant to ramp up production.

“I do know that a lot of the equipment manufacturers — the people who make the shifting and the gearing — have decided to not really increase production because they’re not sure that this isn’t just a bubble in demand in the biking industry,” Richards says. “So we are kind of constrained to what they are going to produce. And I believe from certain conversations that they’ll be certain parts that we won’t’ be able to see until the fourth quarter of 2022.”

He says the types of bikes sold give an indication that a lot of people are just looking to get out of the house and do something. “Most sales are what I would call an active bike geometry. So something that is suitable for trail riding around here, city riding. Obviously, we don’t have a lot of mountains,” he says.

He says for now they will try to help people fix up the bikes they have available until they can look at a new bike once the supply gets back to normal. Richards says the interest in Le Mars is even higher after it was learned they will be hosting RAGBRAI this year.