You are here: Home / Agriculture / Expert: don’t put out tomato plants too soon 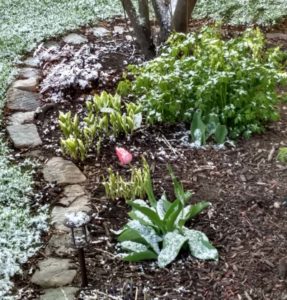 Some plants got a little snow on the last week.

Temperatures are predicted to warm up this week after a couple of hard frost nights last week.

Iowa State University horticulture specialist, Cindy Haynes, says most plants will probably recover from the cold snaps. “Some things that were hit by a really hard freeze — like temperatures in the 20s — you might see a little bit of damage on the new tip growth or the flowers. That might impact things that are supposed to fruit, like fruit trees. But most things, it’s not going to impact,” Haynes says.

The plant damage depends on where you live. She says northern Iowa was a little colder and there may be more damage there than in central and southern Iowa as temperatures there only dropped into the 30s. If you’re itching to get out and plant your garden — Haynes says don’t let the warm temperatures fool you.

“Most of the warm season crops like tomatoes and peppers should not really be planted outside until early to mid-May. Early may maybe in southern Iowa and more mid-May for northern Iowa,” according to Haynes. She says one date usually signals things are safe from a late frost.

“After Mother’s Day it’s usually pretty safe to plant those outside,” she says. Haynes says everyone has been anxious to get outside — but the recent up and down weather patterns should be a good reminder that temperatures can change a lot this time of year.

“It’s actually been a pretty nice spring for most flowering things — because we’ve had the daffodils longer than normal. So, enjoy what’s here now, because it could change tomorrow,” Haynes says. Haynes says some people may’ve already gotten their tomatoes and pepper plants and are just itching to get them in the ground.