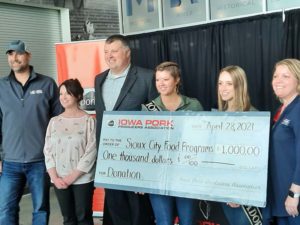 Aaron Juergens of Sunburst Family Farms near Carroll is the southwest director of the Iowa Pork Producers Association and says the past 12 months have reminded them of the importance of community, and he says there are still challenging months ahead, and everyone must continue working together to keep people safe.

He says they are also providing pork coupons at local grocery stores and pork appreciation baskets to some of the first responders. The Food Bank of Siouxland and the Sunnybrook Church of Hope Center Pantry also received pork donations. Sioux City’s Seaboard Triumph pork plant is one of the largest pork processing plants in the country.