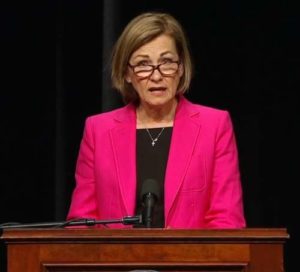 Governor Kim Reynolds is presenting her fellow Republicans in the legislature with a wide-ranging tax plan that she describes as a compromise.

“We think we’ve landed in a really good spot and we’re excited to move forward with it,” she said during a news conference late this morning.

“Iowa has never been in a better position to take tax burdens off the backs of Iowans and invest state revenue to sustain critical and important services,” she said. “Now’s the time to come together and take action and that’s exactly what I’m asking the House and the Senate to do in the remaining days of the legislative session.”

House Speaker Pat Grassley said House Republicans are interested in cutting property taxes, but Grassley told reporters early this afternoon the House GOP is not convinced all the questions about how the state would manage the mental health system have been fully answered.

“Okay, we pick up the levee, what does this now look like and how does this play forward, not only for the cost to the state, but the services provided to Iowans? And I think we’re in a position where there’s a lot of unknowns,” Grassley said. “…If we’re going to take on another social program at the state level, we have to do it right.”