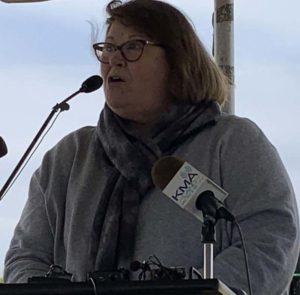 “Hamburg’s resolve to provide additional flood resiliency serves as an example to other communities along the Missouri River and throughout the nation who face similar challenges,” Himes says. “You’ve already done an amazing done, and have made tremendous progress recovering from the 2019 flood event. Today, I along with the U-S Corps of Engineers’ Omaha district team are proud to partner with you in taking another major step in moving forward.”

Hamburg officials agreed to pay the difference between the cost of returning the to the levee’s original design capacity, and the cost of raising it higher. Hamburg Mayor Cathy Crain recalled how the flood impacted the city. “We lost water, sewer, natural gas for 120 days,” Crain says. “Two-thirds of our town was covered in water. Only three of our 44 businesses could open. The other 41 were underwater, and some of them couldn’t even open until September.”

Crain says Hamburg also lost 73 homes to the flooding. Two years later, Crain says the city’s business sector has rebounded, and new housing projects are in the offing. “We now have one more business than when we had the flood,” she says. “We have three new businesses now up and running. We’ve got three more under construction. We’ve purchased two 10-acre plots of land for new subdivisions, and hopefully, if materials for the building could just stabilize a little bit, we’ll be able to get those built.”

Iowa Senator Joni Ernst and Congresswoman Cindy Axne co-sponsored the bill which allows the corps to begin pre-construction on levee improvements without waiting for congressional approval if a project is determined to be critical to flood prevention, and costs less than $25 million. Hamburg is the first community to take advantage of the new provision.