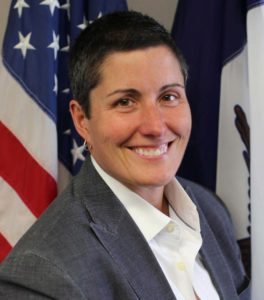 A flower garden at the Anamosa State Penitentiary was dedicated on Thursday in memory of nurse Lorena Schulte and corrections officer Robert McFarland.

They were brutally murdered during an escape attempt at the eastern Iowa prison on March 23rd. Beth Skinner, director of the Iowa Department of Corrections, addressed the Board of Corrections this morning via Zoom for the first time since the killings.
“These two individuals will never be forgotten, and neither will their families,” Skinner says. “Additionally, I want to thank all DOC staff who have stepped up in a very difficult time.”

Two inmates are charged in the murders of Schulte and McFarland. Skinner says donations of cash and items are pouring in from all over the country to honor the two slain staffers, and emails and letters are arriving daily. “I believe I have read over 500 letters from individuals, from agencies across the country,” Skinner says. “The support has been extraordinary. I want to thank everyone for the ongoing support, for the families, for our staff. Words can’t convey the level of gratitude we have.”

The killings caused “a major ripple effect” across the prison system, Skinner says, and a variety of changes are being implemented to prevent it from happening again. A new position is being created, a security operations director, who will oversee all nine Iowa prisons. Skinner says she’s hired Brian Foster for the position and he will start May 24th.

An independent team of investigators is doing an assessment of the Anamosa prison while all nine prisons are subject of a thorough external review. Skinner says she’s also been leading what she calls feedback forums. “I spent about two weeks on the road. I went to every single prison, all nine prisons, in order for staff to voice their concerns to me directly,” Skinner says. “Next week, I have scheduled calls with every single warden and their administration to talk about the feedback that I have received and how we can work together and be more solution-focused.”

In addition to new equipment, including fixed and body-worn cameras, she says suggestions are being made for better ways to communicate “from the bottom up and from the top down.” Skinner says she’ll be visiting all nine prisons every three months to gauge the progress.