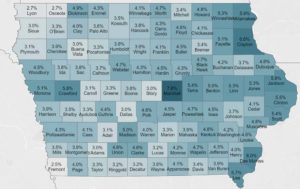 “It’s time for everyone who can to get back to work,” Governor Kim Reynolds said in a written statement announcing the $300 added to an individual’s weekly unemployment benefits will end June 12.

Reynolds said the extra federal unemployment benefits provided “crucial assistance when the pandemic began,” but these payments now “are discouraging people from returning to work.” The governor said with a 3.7% unemployment rate, Iowa “has more jobs available than unemployed people.”

There have been extended federal benefits, beyond the traditional 26 weeks of unemployment for laid off workers, and the governor is ordering those to end June 12 as well. Iowa Association of Business and Industry president Mike Ralston issued a statement praising Reynolds for making these moves. Ralston said the extra unemployment benefits “exacerbated” the workforce shortage Iowa was experiencing before the pandemic. The director of the Iowa Chamber Alliance said Iowa’s economy “needs people to safely and responsibly get back to work.”

“It makes no sense for Governor Reynolds to pull the rug out from under unemployed Iowans while there’s still a worldwide pandemic,” Senate Democratic Leader Zach Wahls of Coralville said. President Biden said yesterday that any unemployed American who’s offered a “suitable job” must take it or lose benefits. Biden said Americans want to work and will, if they’re paid a decent wage.