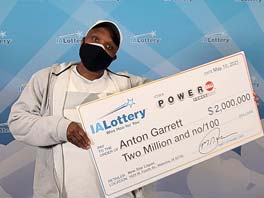 A Waterloo man is a millionaire after winning the second-largest Powerball prize of the year.

Anton Garrett bought five plays on one ticket for Saturday evening’s Powerball drawing and ended up winning over two million dollars. Garrett corrected picked the first five numbers but missed the Powerball, which made his ticket worth one million dollars.

However, Garrett purchased the Power Play, which doubled his winnings. Garrett also had a second winning ticket that was worth $21. The Tyson Foods forklift operator says he picked his own numbers, which were a combination of several of his most different important dates.

Garrett bought his winning ticket last week at a Waterloo convenience store and claimed his prize Monday at the Iowa Lottery headquarters in Clive.

The winning numbers for Saturday’s Powerball drawing were 12-17-20-21-26 and Powerball 8. The Power Play number was 3. Since no one matched all six numbers, the jackpot for Wednesday’s drawing climbs to an estimated $168 million.