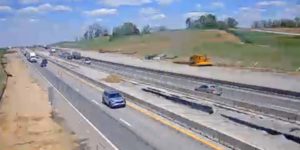 The state Transportation Commission has approved the first draft of its updated five-year transportation plan.

The plan includes an estimated $3.6 billion for road construction and improvement, which the DOT’s Stuart Anderson says includes some ongoing projects. “The Interstate 74 bridge replacement over the Mississippi River in the Quad Cities. We are in the last major year of construction on that project — hoping to see a second span open to traffic by the end of this calendar year,” he says.

It also includes continuing work on the I-80/380 interchange west of Iowa City. “We have the final phase of that work underway now, so that should be wrapped up in the next couple of years,” according to Anderson. “And then out west in Council Bluffs, continuing a multi-year effort to reconstruct the interstate system in that area.” He says work will continue on expanding I-35 to six lanes from Polk County to Story County and Ames.

The pandemic has cause delays in getting products and increased the prices of a lot of construction materials. Anderson says that hasn’t been an issue for roads yet. “So far our lettings for fiscal year 2021 which we are wrapping up now, have come out almost exactly equivalent to the amount we estimated for the five-year program. Which is great news,” Anderson says. “But the next months we’ll be monitoring very closely.”

He says they don’t know how long supply chain issues will last and if they will eventually hit road construction. “There has been discussion about steel prices increasing, obviously a lot of steel goes into construction. Fuel prices — because of the supply issues they are having with fuel now — a lot of fuel goes into road construction projects — so that could have an impact,” Anderson says.

Anderson says the road use tax funding that fell off at the start of the pandemic, but that has rebounded and they’ve also gotten federal pandemic funds to help with any deficits.