You are here: Home / News / Big band leader to get new tribute in his SW Iowa hometown 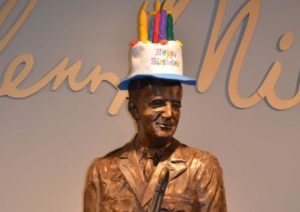 The southwest Iowa town of Clarinda is moving forward with plans to create a large mural to honor native son Glenn Miller, the famed big band leader from the 1940s.

The Glenn Miller Birthplace Society is working with artist John Cerney to develop the project on Highway 71 south of town.

“We started working on this at least a couple months ago,” Alger says. “We couldn’t really push the fundraising, because we had to get approval from the DOT to put this south of town. So, as you’re coming into town from the south, the artist asked for that, because he said that was the best place to display it.”

Cerney is based in Salinas, California, and he specializes in larger-than-life plywood painted figures near highways. Alger says the rising cost of building materials means more funds are needed to make the project a reality.