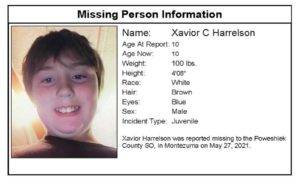 The search for a missing Montezuma boy who was last seen late Thursday morning continues in Poweshiek County.

Hundreds of volunteers turned out Sunday on Xavior Harrelson’s 11th birthday to search in areas within one mile of the boy’s home and in rural areas around Montezuma. Iowa DCI assistant director, Mitch Mortvedt gave an update today on FOX News, and was asked why an Amber Alert hasn’t been issued.

“What we concluded thus far is that it could probably be one of four avenues,” according to Mortvedt, “it could be a walk-away or runaway situation. Whether he was somewhere and had a horrible accident and we have not been able to locate him. Or it could be criminal. With the criminal element and the Amber Alert in Iowa, his disappearance thus far has not met the criteria for an Amber Alert in Iowa.”

He says investigators are going over their plan to be sure they cover all angles. “Reviewing everything that we’ve done thus far — yet getting new information in and trying to find where Xavier is,” he says. Mortvedt noted many of the same people who searched for Mollie Tibbetts near Brooklyn three years ago helped search for Harrelson.

He says they have brought in search dogs and have searched Diamond Lake. “We’ve done everything possible, and anything we can think of,” Mortvedt says. Mortvedt says this is classified as a missing child case — not a kidnapping.

Searchers have gone door-to-door in Montezuma and dive teams have searched Diamond Lake which is about a mile west of Montezuma.