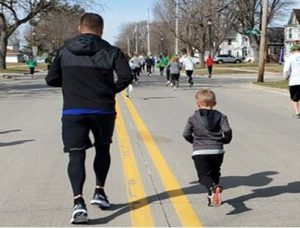 A Manchester man is running across Iowa in honor of two fallen co-workers.

Ryan Miller works as a correctional officer at the Anamosa State Penitentiary, where another officer and a nurse were killed during an escape attempt on March 23rd. Two inmates are charged with the murders.

Miller says his run is an effort to bring awareness — and money. “What I’m looking to do is raise some funds for my fellow officer Robert McFarland, the family of Robert,” Miller says. “We have a goal of sending his family on a vacation anywhere they’d like to go in the world and we’re raising money for that and we’re raising some awareness and attention to Robert and Lorena Schulte and what happened that day.”

Miller started his journey in Sioux City and plans to run about 40 miles a day. “The plan is to go across the entire state, going from Sioux City to Dubuque,” Miller says. “It’s a total of 339 miles. As I cross through the state, the route crosses over 40 towns including here in Manchester and through Delaware County. It’s river to river, we’re going from the Missouri River to the Mississippi River.”

Miller says he welcomes anyone to come out and run with him at any point along the way. He calls the prison system Iowa’s “forgotten department.”

“A lot of times, you only hear about a prison if something bad happens,” Miller says. “The message I would like to put forward is, as a person who works within the department, every day you don’t hear about it, that’s because of the hard work of the men and women within the department, people that live in the state of Iowa and they choose, as a career choice, to go into those institutions every day.”

Miller has a goal of raising $20,000 for the families of McFarland and Schulte. He’s almost halfway there, with nearly $9,000 raised so far. To learn more about Miller’s run across Iowa or to donate, visit his website: visionrunner.org.