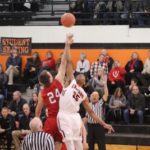 Picture from Elwin Huffman at KOEL

A new high school athletic conference will have at least 11 teams when the yet unnamed league launches in the 2022-23 academic year. The Waterloo Board of Education Monday night unanimously approved a resolution, granting Waterloo East’s request to leave the Mississippi Valley Conference. East Athletic Director Tim Moses says the new conference is a better fit for the Trojans.

“The reason it’s such a good move is because we now have a level playing field,” Moses says. “It’s the same reason why those schools in Des Moines want to be a part of this new conference as well. The social economics and the demographics of these schools that are joining this new conference all look similar.”

Ames, Fort Dodge, Marshalltown, Mason City, Ottumwa and the five Des Moines public schools – East, Hoover, Lincoln, North and Roosevelt – all recently announced plans to leave the Central Iowa Metro League and form the new conference. Moses says sports teams at all 11 schools have struggled for several years to be competitive against the larger, growing schools in their current conferences.

“These schools are all down like we are,” East’s athletic director says. “They are wanting to re-establish themselves and build their programs back to respectable programs. I have no issue with that. For us, it’s a great opportunity. I couldn’t be more excited for East High athletics and all the people that were involved in this process.”

Preliminary plans indicate the new conference would be split into two divisions, with Ottumwa and the five Des Moines schools competing in the South Division. Waterloo East would be in the North Division along with the Trojans’ other former rivals from the old Big Eight Conference: Ames, Fort Dodge, Marshalltown and Mason City.

Waterloo East has been a member of the MVC since 1992.

-story by Elwin Huffman at KOEL