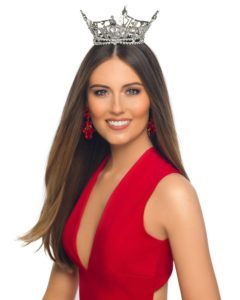 The new Miss Iowa was recently crowned at the pageant in Davenport and says she is still getting used to the title.

Twenty-two-year-old Grace Keller is a native of Illinois, who just graduated from the University of Iowa with a degree in journalism. She says she fell in love with Iowa when searching for a college. “I always say that I was born and raised in Illinois and that was great to have them be my home. But, Iowa was the home that I got to choose. And I really got to see a lot of places and settled on Iowa because of that Iowa nice and the sense of community that we have here,” Keller says.

Keller says she had been involved in pageants several years ago but had taken a break to be a college student. She decided to compete again, in part, because the Miss America program is a large scholarship program and she was low on funds. She says she really wanted to just go and have fun and perform her talent, which is dance, with the hope of winning some scholarship money.

Keller’s Social Impact initiative is to promote literacy in kindergarten thru third grade. She says she is passionate to promote the cause. “I want to be that person for those people all across Iowa who are just looking for a mentor or an inspirer to really push them into that love, so that they can reach those benchmarks and set themselves up for success later in their education,” she says.

The new Miss Iowa says she still was not anticipating earning the title even after she was in the final two on the stage. She says she was proud to even get first-runnerup. “And then they announced me as the winner. And I think at that moment I was like are they sure, is this actually happening? And then the Miss Iowa who was passing on her title came over and gave me a hug and that’s when I realized oh my gosh this actually happened, they called me up the winner,” Keller says.

Keller had taken a position with a start-up podcast company and will go back to that. She says she’s excited to represent the state and meet people across Iowa.